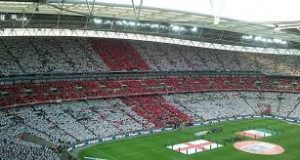 We all know of the brilliant football available in England. But which stadiums are the best? For this top 10 list of best football stadiums in England, stadium capacity was used. Capacity may not make a stadium good, but for simple measures, let’s assume that a higher stadium capacity equals higher gate receipts which in turn helps improve the quality of the football team and stadium.

Built in 2000, the Stadium of Light is home to the English football club Sunderland AFC and is located in Sunderland. The stadium has had a long and still has plenty to go. Depending on club performances, the stadium has the potential to be expanded to a stadium capacity of 64,000. This would jump the Stadium of Light to being the 3rd best football stadium in England.

Built in 2000, St. James Park is home to the English football club Newcastle United and is located in Newcastle. With the possibility of expanding to 60,000 seats, St. James’ Park is one of the best stadiums in England. The stadium has been chosen to used in 2018 World Cup if hosted in England and has already featured international fixtures in the Euro 1996 competition.

Built in 2006, the Emirates Stadium is home to the England’s Arsenal football club and is located in London. Emirates Stadium was born out of necessity. A top English team like Arsenal was playing at Highbury Stadium with a capacity of 38,419. Being one of the newer stadiums in England, it has not featured international fixtures but you can be sure that this will change.

Built in 2007, the Wembley Stadium takes top honors as the number 1 stadium in England. Wembley is the home to England’s national football team and is rightfully the best stadium in the country. It is also the second largest stadium in all of Europe.